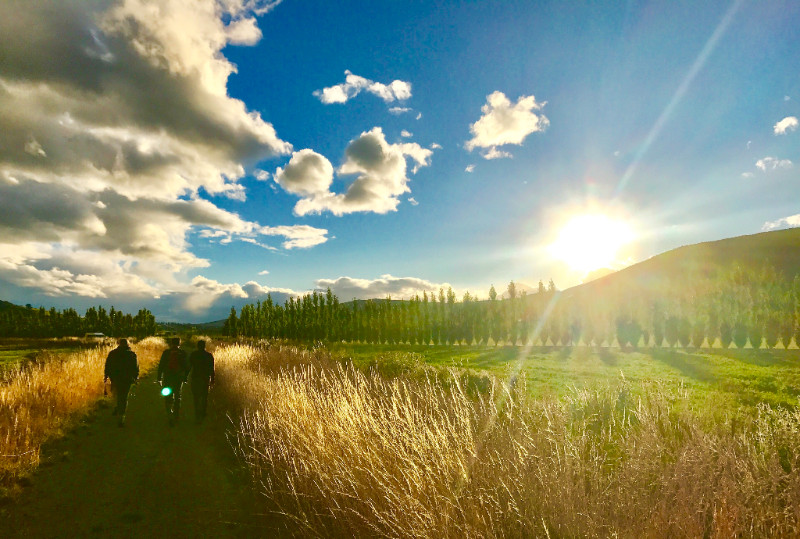 It’s sooooo nice to be able to write to you all again, after somewhat of an extended absence over our southern hemisphere summer!

In my mind it kinda feels like it’s the first day back at school after the holidays and everyone’s catching up on what everyone else did over the break… but of course that’s just me—given it’s now mid-March perhaps it might be more like everyone else has been back at work and life for a while now and I just turned up a few months late. Ooops.

Well, anyway, I hope you had a great break, if you were lucky enough to take one.

Having kept myself overly-busy for most of the period from 2014 until late 2016, what with the writing of a book and stupid amounts of travel and work and attending a business school and the relocation of my family from one side of a continent to another—under the now-realised but ultimately foolishly subscribed-to illusion that to be busy and productive and efficient is a glorified path to success—the seams of many things started to unravel.

Rather than being Light and Fast, which is an admirable and noble and responsive and a consideredly intuitive approach to all things (based upon a deep understanding of oneself and of the surrounding world), I realised that I had in actual fact become Light and Loose, which is in no way admirable nor noble and is instead a reactive and fear-driven approach to all things, and which amusingly enough is a condition I warn many of my clients about. Ah, the deep irony!

Before I even knew what was happening, my Light and Loose approach was beginning to manifest in less than ideal outcomes. It effected me personally (I was a lousy dad and husband, I was overweight, and I was depressed), and it effected me professionally (I stopped writing, I was turning up late to meetings and missing flights, and I was delivering transactional and at times mediocre work).

Nearing the end of 2016, it left me asking myself this question: How on Earth can this be so?*

*It also perhaps provides an explanation for the title of and reason for my last piece of writing, which you can find here. Here’s an inside tip from last year: if you’d like to decrease the size of your readership/subscription base, it’s really easy—just include profanities or suggest ‘giving the finger’ in your newsletter titles and they’ll leave you in droves! For those of you who have stuck around: Thank you!

But of course, I was already aware of the central root of my malaise. I wrote about it in late September of last year, in this piece here—I proclaimed it to be the most important thing I’d ever written—where I highlighted the difference between the complicated and complex domains. You see, the problem was that in issuing my rallying cry, I’d failed to heed my own advice—despite my best intentions, my literal ‘history’ meant that I was erroneously mired in the complicated domain, and I found that extracting oneself from such a domain, complete with its Guardians of the Ordered, was not as easy as one might well imagine.

For the previous few years I’d been studying at a school whose principles and values, like many schools, were very much rooted in the complicated, but not complex, domain. I’d been taught to be ruthlessly efficient with my productivity, both in terms of building and delivering new ideas, and in selling them to the business world. I’d been taught that the quantifiable metrics of delivery and sales were the ultimate tools for measuring success, and I’d been taught transactional and easily-scalable products were the best way to affect improvement in the world of business, organisations and work*. All very well intentioned.

*Note that the language I use here—ruthlessly efficient, productivity, building, delivering, quantifiable metrics, transactional—all belong firmly to the complicated domain, and all that is Expedition Style, too.

But as I went about implementing what I’d been taught, I started to realise that, at least for me, it wasn’t working.

Sure, I was getting busier and busier working with larger and larger corporate clients, and my revenue was increasing—so the quantifiable metrics were indicating success—but I didn’t actually feel successful. In fact, I knew it not to be the case. Instead, I just felt tired and uninspired and quite desperate to get off the escalator-to-nowhere of expectation and constant growth.

The biggest consequence of this was that whilst the quantity of my work was increasing, the quality of my work was not—rather, it was becoming old, stale and static. It was becoming off-the shelf and transactional in nature, rather than beautifully customised and tailored and constantly evolving (which I believe it needs to be to remain consistently relevant and of value for my clients, and interesting for me). I was advocating Light and Fast and complexity-based approaches and yet I was inadvertently operating back in the old-fashioned way of Expedition Style.

Over the summer, things needed to change

Which of course, they did*.

*In any complex system, it is enviable that things will change over time. In fact, complex systems are dynamic, and constantly changing.

The final catalyst came soon enough: at the time unexpected (but in retrospect inevitable) friction with the Guardians of the Ordered—those folk so invested in the past that they fear anything different and challenging*—provided the necessary canvas for a deep reassessment.

*As an aside, you might be interested to know that there is a not-insignificant correlation between those who are Guardians of the Ordered, and those who are that most unpleasant of human character-type, the Alpha Male. I will write another piece on the Alpha Male soon, because I have learned much about them over the past 12 months.

Friction removed and with a new year ahead, from the first three months of my 2017 calendar I stripped out literally everything to which I was not already bound and committed*, and instead I allowed large portions of time for… nothingness.

*In case you’re wondering: yes, this is actually a very Light and Fast move to pull—you literally strip out everything from your system that you don’t need (and which does not provide natural redundancy), and instead aim for antifragility from the bare minimum of things.

An exercise in nothingness

Thus, over the summer I decided to follow* a gymnosophist’s philosophy whenever the opportunity allowed. Because, ultimately, in a complex world, trying to conquer things, as was Alexander’s desire, doesn’t work. It can’t work. It’s a fallacy.

And wow, what a remarkable philosophy it is, especially if you are playing in the space of the complex domain**. The reason being, of course, is that in the complex domain, the sum of the system’s parts—the “ensemble of its components”, to quote the irreverent Nassim Nicholas Taleb—is not what you expect it to be. Without an agenda, the emergent nature of the whole system, unconstrained by any desire for order and control and engineered solution, allows for the truly interesting, and indeed the innovative and the unique and the exaptated***, to emerge.

*Perhaps ‘return to’ would be more fitting than ‘follow’, because my adventures into the mountains over the past few decades have ultimately been about nothingness, as bizarre and counter-intuitive as that might sound.

**Of course, if you are stuck in the rigidity of the complicated domain, then such a philosophy is likely to be perceived by others as lazy, wasteful and self-indulgent. And herein lies the challenge for you, me, and the entire world of work. You have been warned!

***Exaptation is an interesting concept that sits alongside adaptation as one of the primary selective mechanisms in evolutionary biology. More on this, as it relates to organisations and innovation, another time.

Fortunately, it being summer and all down in these parts, I had much mountain and ocean time up my sleeve—and I know no better places to immerse oneself in an exercise of nothingness than in those that belong to the abodes of the mountain and the sea.

And so commenced my exercise in nothingness.

Idly wandering up a valley with a few close friends (flaneuring is what some call it; I equally refer to it as mooching), not caring about the time and only being guided by when the sun was going to set. Standing thigh-deep in a sun-dappled alpine stream, casting a dry fly to an occasionally rising trout, and being indifferent as to whether or not I actually caught it. Sitting out the back by myself and letting a perfect set go by, deliberately not catching it, because, well, does it really matter if I don’t?

Yes, but why should you care?

Exactly—you are probably wondering how this is actually relevant to you?

Well, I’m going to suggest that it’s relevant to you on (at least) two levels.

Firstly, because if you are like the overwhelming majority of folk living and working in this great bastion of the complicated, modern, western world, an exercise in nothingness is all too often met with disdain—the response will be akin to Alexander the Great asking the gymnosophist what the point is of doing nothing.

And yet, as more and more people begin to awaken to the folly of the engineered, industrialised, complicated approach to the world, it is an exercise truly worth undertaking. It might well even save you.

The second reason for relevance is because, my Dear Reader, it sets the context for the year ahead, and for what we’ll be exploring together. Writing these missives to you is, without question, one of the highlights and greatest honours of the work that I do.

PS If you’re wandering why I didn’t share any particular lessons learned from my little exercise in nothingness then, well… you’ve kinda missed the point!

PPS I’m not sure whether it’ll be an exercise in nothingness, but it certainly does look pretty interesting: upcoming conferences in both Sydney and Melbourne about the radical humanisation of the workplace, featuring big-time TED speaker Tim Leberecht. In case you’re wondering, both Tim and conference organiser Mykel Dixon definitely appreciate the world of complexity and understand its ramifications for the world of work.